Independent advice on all aspects of employment law

No win no fee claims 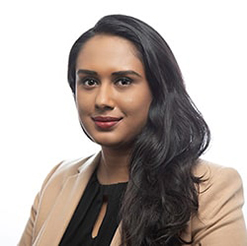 Varsha joined the team in November 2018. She previously worked at a full service commercial law firm in Central London as well as in the employment departments of a leading London human rights law firm and international corporate law firm. Varsha graduated in law from SOAS (University of London) and holds both the LLM and LPC with distinction.

Varsha has experience of drafting, negotiating, and advising on settlement agreements and contracts of employment.

Varsha has a particular interest in contentious matters and has assisted in bringing and defending a number of litigation claims brought both in the Employment Tribunal and High Court. These have specifically included claims for unfair dismissal, breaches of contract, and complex discrimination claims under the Equality Act 2010.